Sven Väth’s COCOON present their most volcanic announcement to date, unveiling his favourite giants Kraftwerk will make their debut Ibiza performance at the island’s iconic open-air venue, continuing to celebrate 20 years of COCOON. 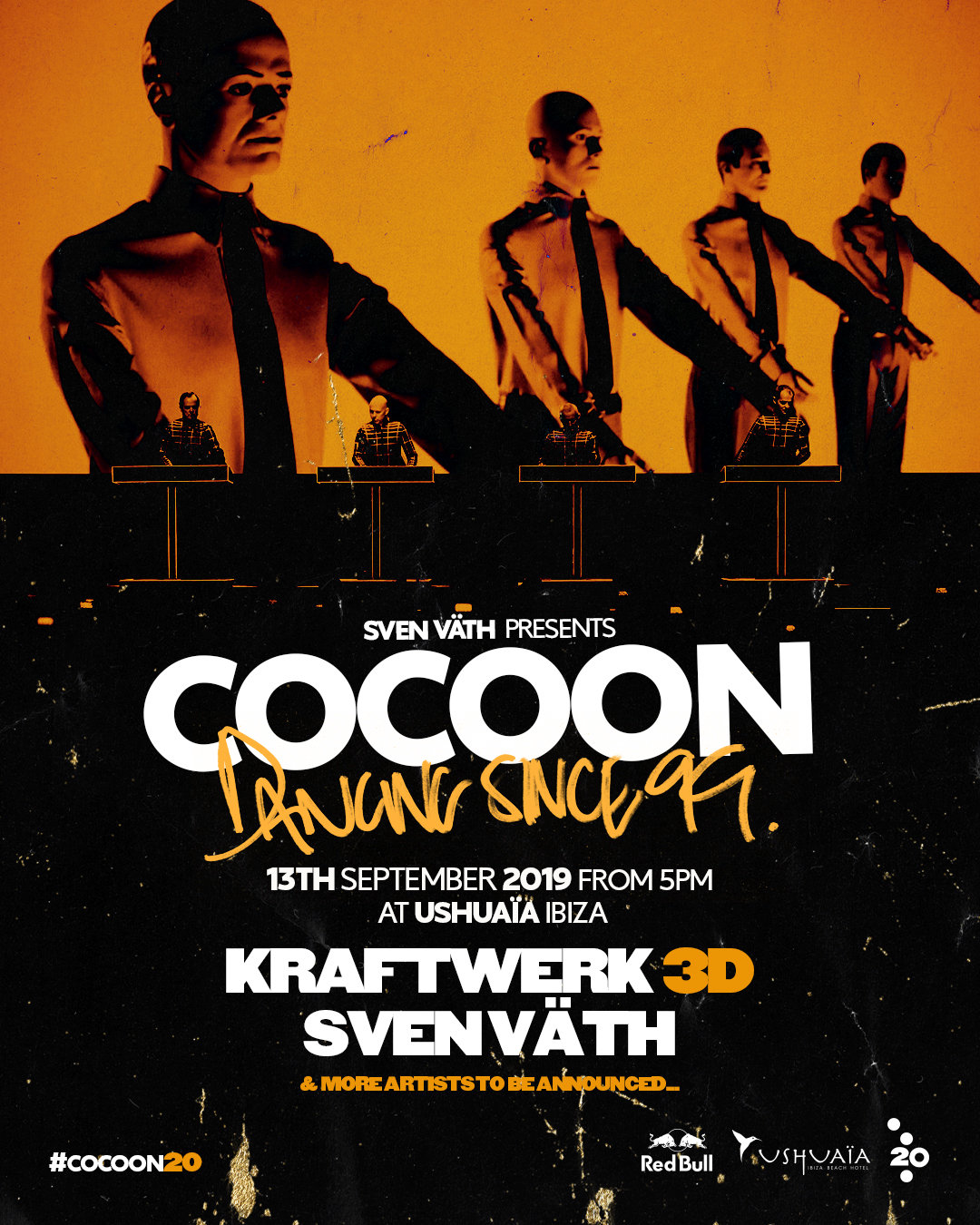 COCOON20 Not long now. Excitement and anticipation. The Platinum anniversary. One of our biggest ever announcements.

Even after 20 years this is volcanic. For the man who started all this it is a dream come true. Sven Väth presents his favourite giants. Kraftwerk. A 3D multimedia performance for their first ever visit to Ibiza.

Inspiring, audacious, inscrutable innovators. Electro pioneers and visionaries. Influential is not a big enough word. Detroit techno to hip hop. Bowie to Bjork to Blondie and beyond. Their fingerprints are simply everywhere.

After their worldwide hugely successful 3-D concert tours, the Electro pioneers Kraftwerk remain of the most sought-after acts in today’s electronic music landscape. Bringing together music and performance art, Kraftwerk 3-D concerts are a true  "Gesamtkunstwerk – a total work of art.”

The multi-media project Kraftwerk was started in 1970 by Ralf Hütter and Florian Schneider.  They set up their electronic Kling Klang Studio in Düsseldorf, Germany, where they conceived and produced all Kraftwerk albums. By the mid-1970’s Kraftwerk had achieved international recognition for their revolutionary electronic ‚sound scapes’ and their musical experimentation with robotics and other technical innovations. With their visions of the future, Kraftwerk created the soundtrack for the digital age of the 21st century.

Their compositions, using innovative techniques, synthetic voices and computerised rhythms, have had a major international influence across an entire range of music genres: from Electro to Hip Hop, from Techno to SynthPop. In their live performances, Kraftwerk – Ralf Hütter, Henning Schmitz, Fritz Hilpert,  Falk Grieffenhagen – illustrate their belief in the respective contributions of both man and machine.

Sven Väth, the founder of COCOON, and The Night League, the team behind Ushuaïa Ibiza, and are humbled to host Kraftwerk’s first ever Ibiza performance. The rich history and incredible influence of all parties involved makes for a fascinating partnership that will undoubtedly lead to a momentous occasion on September 13th at Ushuaïa Ibiza.